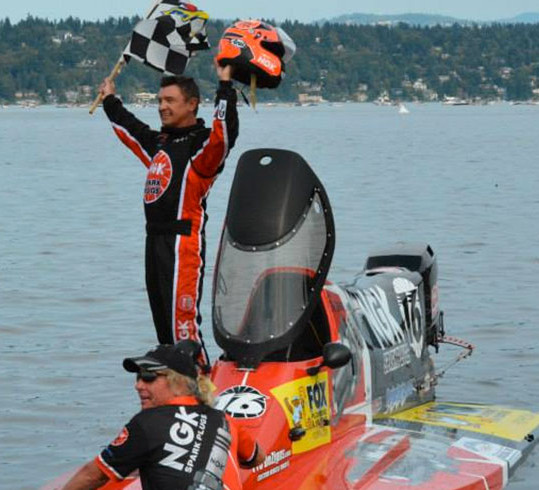 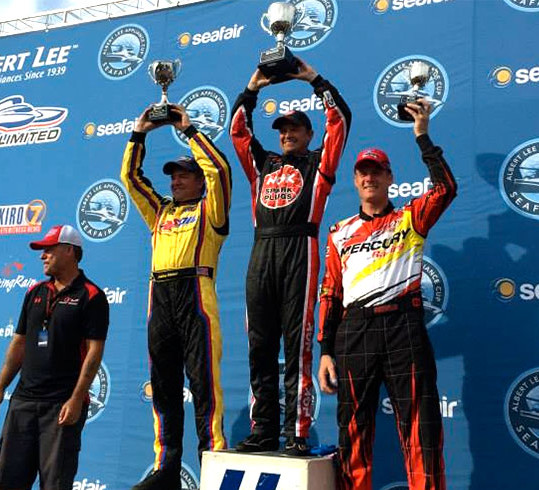 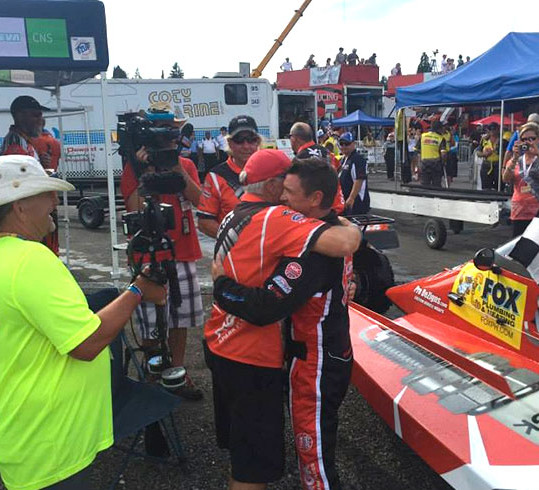 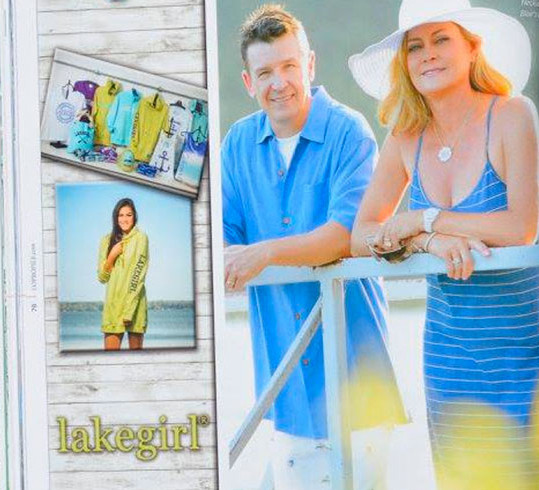 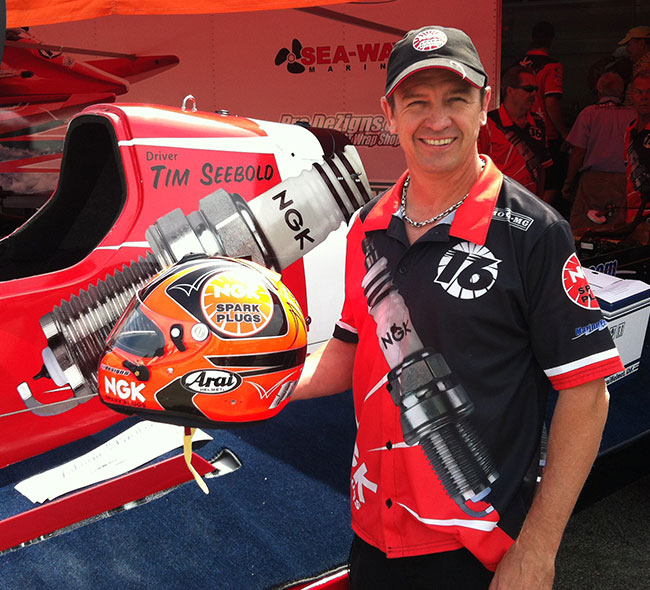 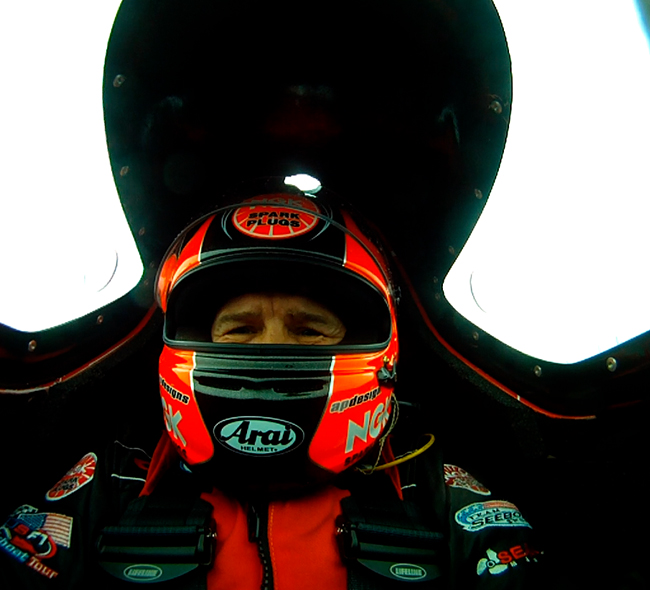 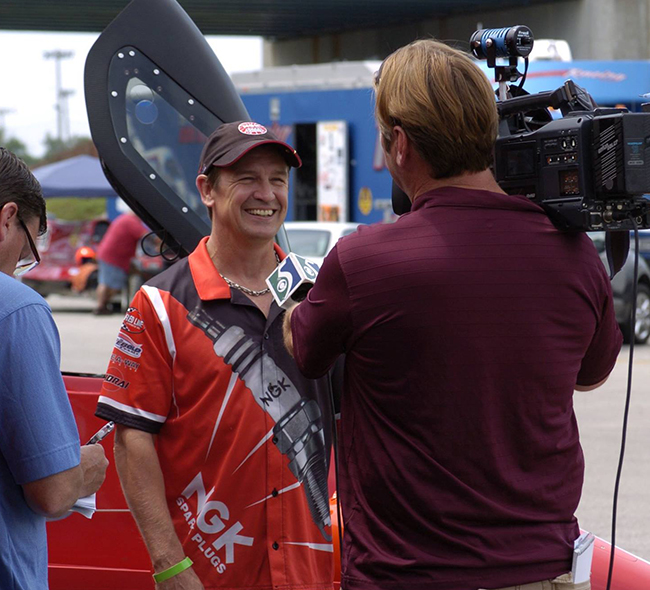 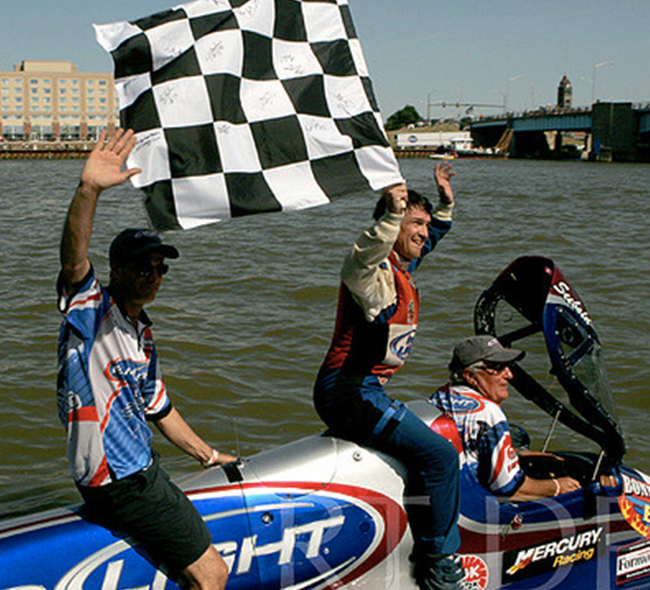 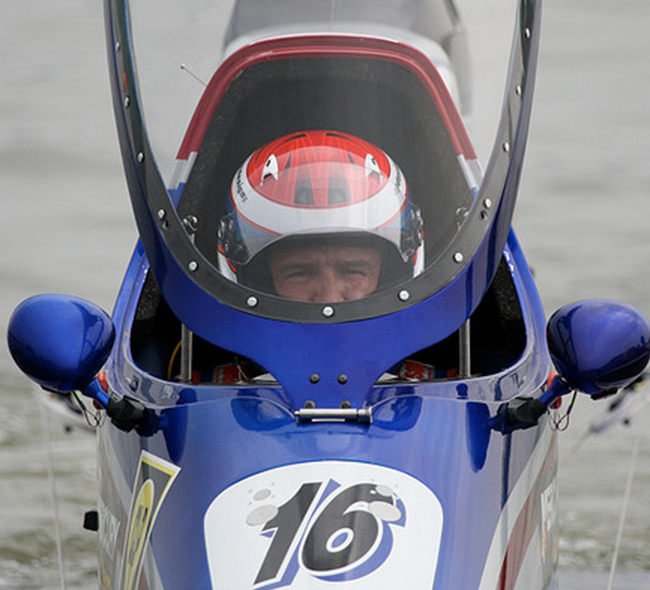 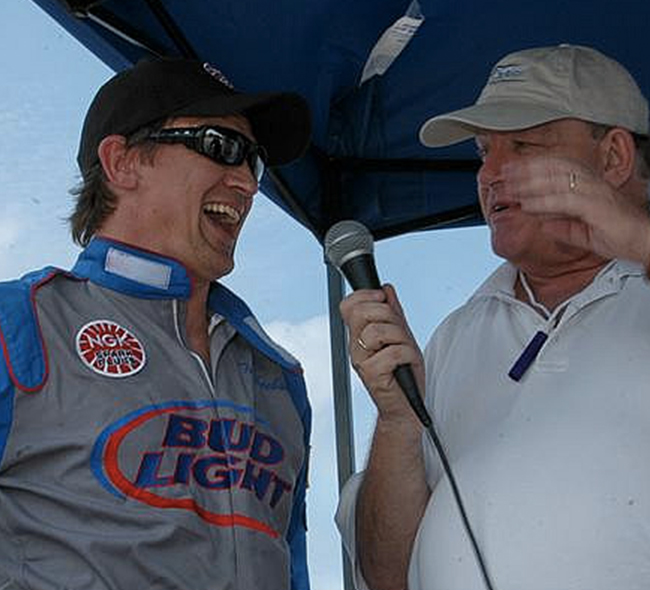 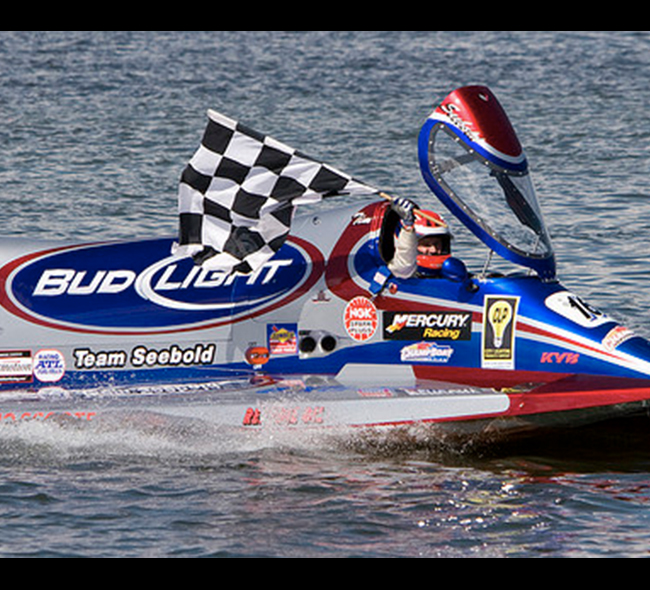 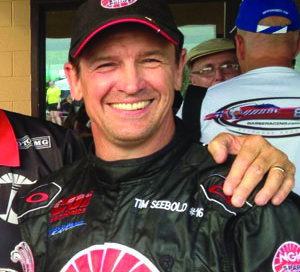 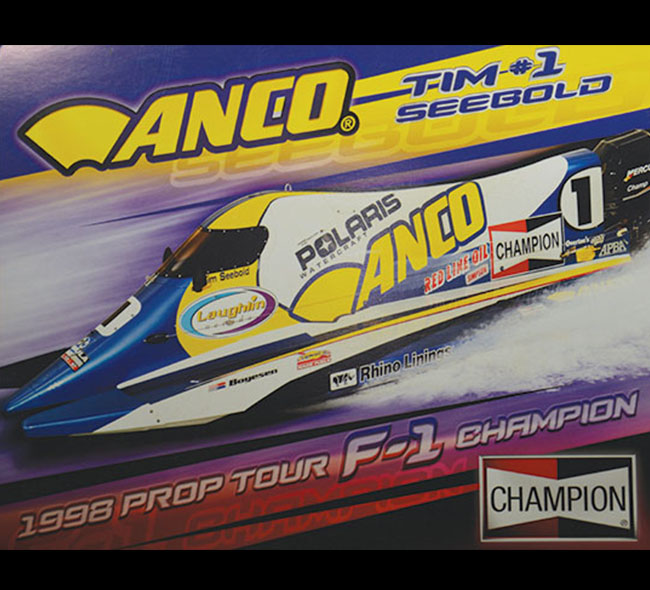 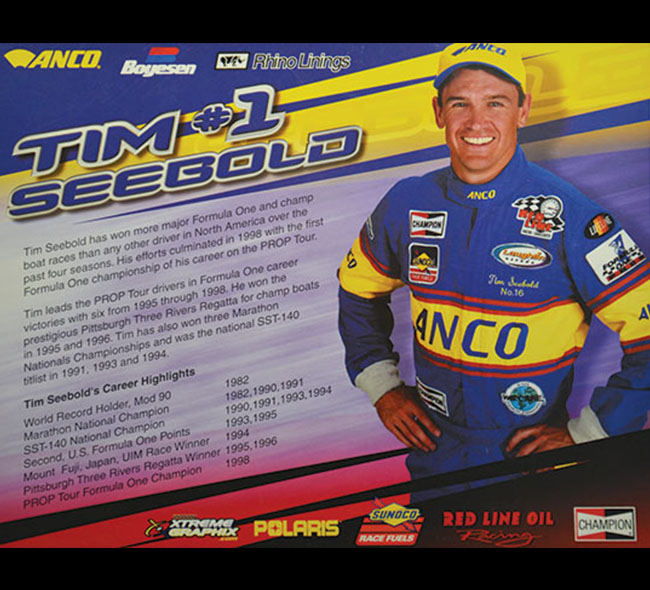 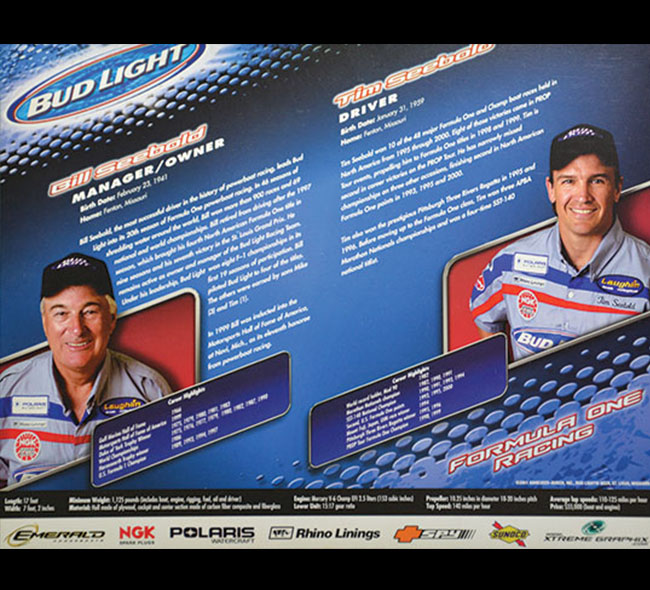 The NGK Spark Plugs Formula 1 Powerboat Championships managing director steps out of the driver’s cockpit after a 44-year long career. Tim along with his longtime friend John Schubert created the series in 2017 to solidify the future of formula one powerboat racing.

Growing up he worked for his father Bill Jr. after school and on weekends at Seebold Racing, learning everything there is to know about the boats, what it takes to make them win along with the Seebold Work Ethic. Grandpa Seebold (Bill Seebold Sr.) purchase a couple of 8’ long J-Hydro boats with 6 ½ horsepower Mercury outboards on them from local boat builder and friend Tim Chance starting both Tim (8 years old) and older brother Mike (13 years old) racing. It was all for fun racing the other 8 or 9 kids around the local St. Louis area a handful of times a year. “Back then you worked on the boats and practiced learning the beginning stages of boat racing more than you actually raced,” Tim recalls.

Graduating into the faster boats as he got older Tim ran his first professional race at age 13 in a C-Service runabout. “When your growing up in boat racing, particularly at the time- once your out of the J-Hydro class your competition wasn’t with other kids. Once you got started going up the ladder into different faster classes, you’re racing against grown men.” At 16 the progression took him onto the national circuit in the Mod 50 class where a year later he would win his first national championship setting a UIM (Union of International Motorboating) world speed record in the process at 17 years old.

After attending the University of Missouri (MIZZOU) on a division one wrestling scholarship Tim returned to the family business at Seebold Powerboats, eventually becoming the plant manager of the recreational pleasure boat business. In 1993 Tim moved to central Missouri’s Lake of the Ozarks to start Seebold Sports, his own powersports business selling motorcycles, all terrain vehicles, utility vehicles, while specializing in Polaris personal watercrafts. Later Seebold Sports would become the largest Polaris watercraft dealer in the world from 1999 through 2004. Tim purchased Seebold Racing from his father in 1998 specializing in the development, design, manufacturing of racing boats and their related parts. For the next 10 years he would split his time between the two companies located two and a half hours apart from each other before moving the race shop to the Lake of the Ozarks. Tim would later sell the powersports side of the business in 2014.

A Seebold style farewell- at the beginning of the 2016 season Tim announced he would be retiring after the end of the racing season. The “Last Lap Tour” would be the end of a motorsport’s dynasty started back in 1939 when Grandpa Seebold built and raced his first boat on the Mississippi river. Winning has been a family tradition for 77 years. Bill Jr. started racing at 11, blazing an amazing 46 year career (over 900 race wins, 69 World/National titles) before retiring in 1997. Mike has won several National Championship in outboard tunnel racing including offshore. And now Tim making the decision to retire after 44 years of competing. “We were around boat racing 24/7, it was in the family. Kids always have heroes and want to be like their heroes or people they look up to. The only difference for me was that it was my family.” Tim continues “My grandfather, my father, my older brother, and I have spent our lives dedicated to this sport. One of the things that made our family thrive was that we all did it together. We all were heavily involved and active in the sport and racing was a family affair.”

Tim along with longtime friend John Schubert in collaboration with NGK Spark Plugs created The NGK Spark Plugs Formula 1 Powerboat Championship in 2017. The 6 race national series was created to elevate the professionalism of powerboat racing while increasing exposure for the sport. Higher purses along with year end points fund giving back to the racers the necessary funds to reinvest in their equipment. Continuing growth in all aspects of the series from increased boat count, new race sites in larger markets to television coverage accompanied by live streaming of the events to raise Formula 1 powerboat profile. Since the series inception it has continued to prosper each and every year as it steadily stays true to the core beliefs of its inception. 2020 will see an expansion of the series by the AFPGP (Australian Formula Powerboat Grand Prix) Association adapting the rules and format of the NGK Spark Plugs Formula 1 Powerboat Championship. “I am very proud of our accomplishments but we have much more to do, I am excited for the future of the series and Formula 1 powerboat racing.”