Tim Seebold and Seebold Racing set a goal at the end of the 2014 season – win the championship in 2015. Mission accomplished!

“The entire team worked their butts off this year,” said Tim, a third generation racer from the legendary Seebold family. “It is very satisfying when you work that hard to achieve a goal, like being the Formula 1 champion and it actually happens.”

Tim Seebold and Seebold Racing set a goal at the end of the 2014 season – win the championship in 2015. Mission accomplished!

“The entire team worked their butts off this year,” said Tim, a third generation racer from the legendary Seebold family. “It is very satisfying when you work that hard to achieve a goal, like being the Formula 1 champion and it actually happens. You just can’t duplicate that stuff.”

This win continues the 76-year legacy of the Seebold family. The 76-year legacy is unique in that they are not only the owners, they are actually racing. Bill Seebold, Sr. built the first boat he raced at the age of 25. Bill, Jr., “Billy,” started racing when he was 11. He was inducted into the Motorsports Hall of Fame in 1999 after winning more than 900 races and 69 world and national titles in his 46-year career. He retired after the 1997 season. He won many of those races over his sons Mike and Tim who started racing at ages 13 and eight respectively. 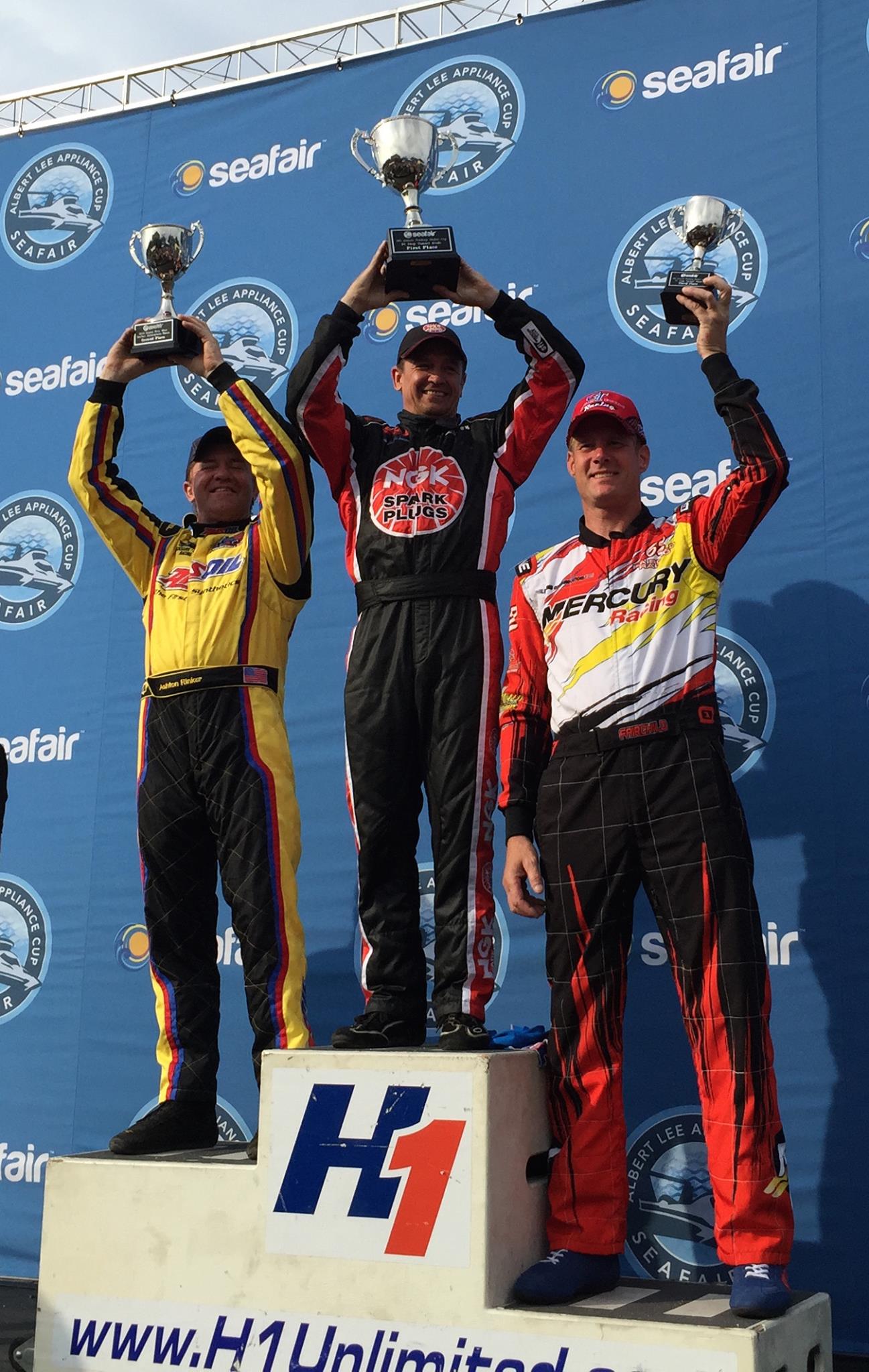 “It’s always been about more than racing,” adds Tim. “Our family has devoted our lives to the sport. This year is no exception. My team and I have dedicated 100% of our efforts to boat racing. And, we aren’t finished. We still have four more races this year. Winning the F1 Championship is an amazing feeling. We just have to wait a month or two to really soak in what it really means.”

Seebold Racing and has won the majority of races over the past few years, but this is the first outright Formula 1 championship for the team since 2007. “We’ve been right there for several years and put up a big effort this year to win the championship for NGK and our sponsors,” said Seebold. “It is all of the fine details that makes the difference between first and second. It’s the little stuff. It’s the person who has the best worst day.”

Seebold had what appeared to be a comfortable 11-point lead for the championship heading into the final F1 race in Seattle. He barrel rolled in the first heat, had some other setbacks and went into the final race with a three-point lead over longtime rival Terry Rinker. If either of them finished first, the title was theirs. Tim got a great jump off the dock, as they did all weekend, and led the race from wire to wire to bring the championship, his sixth in this series and fifteenth overall, back to the family.

“The battle with Terry has been pretty intense for the past decade and a half,” reflects Seebold. “We have been battling since the mid 90’s. There were more people in the mix before, but there feels like more pressure now because of where Terry and I both are in our careers. Neither one of us make a lot of mistakes. Although, I did in Seattle and it almost cost us the championship.”

You can find the remaining 2015 schedule here. Or, visit https://www.seeboldsports.com to find out more about Seebold Racing and the legendary 76-year history of the first family of motorboat racing.

Recapping the 2015 Season from Tim’s Perspective
“Laporte, IN – the first F1 race. I had never won that one before. We came out, started from pole and led every lap. That was a real exciting race because there were 22 boats in the deal. So you were constantly in traffic, and that course also has a right hander on it which makes it more interesting.

Second race we went to Bay City, MI. Long-standing event. Been around about 28 years. Have won it a few times, I think I’ve won it six times now. In this one I had a battle between Rinker’s son, Chris Fairchild and myself. Terry wasn’t in the mix in that race and that is where I kind of gained some of the points over Terry. I just kept accumulating a couple of points.

After that we were supposed to go to Pittsburgh which they cancelled because the conditions weren’t favorable to race.

From there it was on to Quebec, Canada. We were running well. In this one we raced with a bunch of other classes. In one of the races we were out front and the power steering broke. It actually broke inside and the steering wheel broke off in my hand. About 115 mph and the steering wheel came off in my hands. That’s not a good feeling. It went immediately 90 degrees left, 180 degrees left really, in about a 20 foot area. Luckily, there was no one inside of me.

From there we went into the backup boat. We won one of the other heat races and got second in the final. This was my best worst day.

The fourth race was the series finale in Seattle where we barrel rolled and came back to win the race and the championship.”