“The thing about racing is that it is always evolving,” Seebold declares. “If you sit still, you are behind. Even if you won the last race. 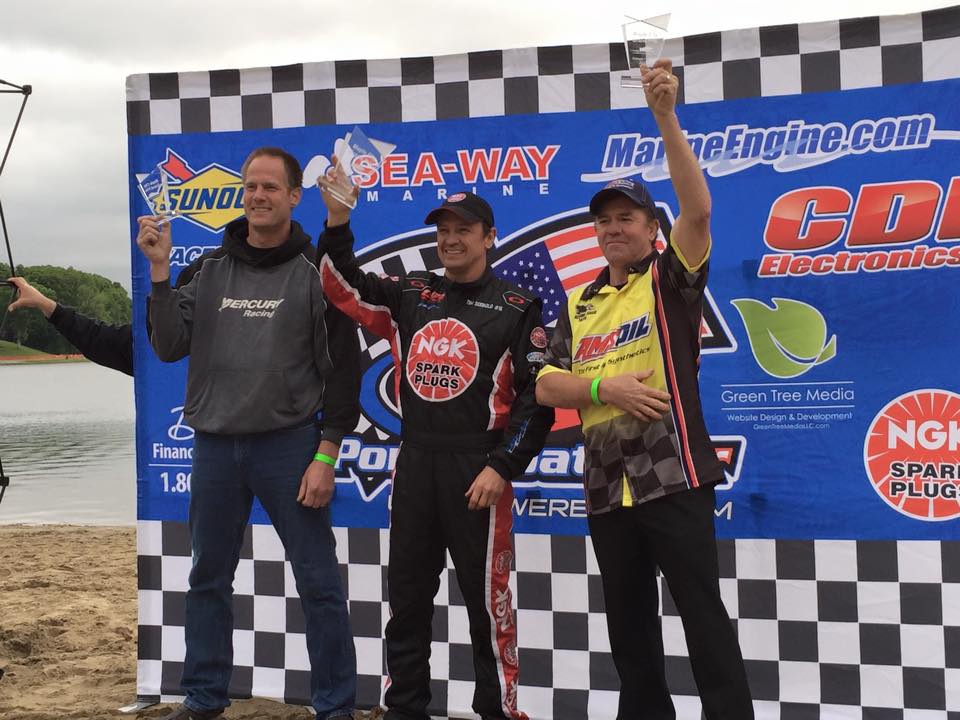 Seebold battled less than ideal weather conditions, a busted propeller during the match race and the 22-boat heat finals with old nemesis, Terry Rinker, for the win. “The weather up there was cold, foggy and rain off and on,” recalls Tim Seebold, talking about the conditions for his NGK Spark Plugs sponsored boat. “The rain doesn’t affect us, but the wind really does. Stone Lake is a great venue, but the way it was set up, and the way the wind was swirling – we were actually running into the wind on three straightaways!

“Despite the bad weather, it was a real good event,” said Seebold. “It was a busy day with all three of the heats and the final on the same day. Our team was happy to come away with the win especially after last year when we led all the way into the last corner and broke a prop and finished second. To start the season this way was nice for the whole crew—they’ve been working their tails off getting everything ready.”

Winning the Race Is Much More than Race Day

“The thing about racing is that it is always evolving,” Seebold declares. “If you sit still, you are behind. Even if you won the last race.

“We worked hard all winter to be ready for this race, for this season,” Seebold continues. “All of the equipment worked flawlessly. It was a very exciting race. The boat did exactly what we needed it to do. The crew had everything prepared so I had everything I needed to be able to go out and do the job.”

Keeping It In the Family

The first place win in the Formula I race wasn’t the only podium finish for Team Seebold. Hayden Jacobsen, the 20-year old son of co-owner Greg Jacobsen, finished second in the Formula Lights in LaPointe. “We’ve been working with him, training him and teaching him the art of boat racing,” says Tim Seebold. “He did a fantastic job and earned the best finish of his career. So for us, a first in Formula I and a second in Formula Lights is about as good as it gets.”

Team Seebold – Eye on the Next Race

The Seebold Sports Team won’t rest on the success of opening weekend. They will go through all of the boats to get everything ready as the circuit heads to Bay City, Michigan for the second event, the Bay City River Roar on June 26 – 28 on the Saginaw River. “Bay City is a long-standing race,” says Seebold. “It is a rough water race because there are sea walls down both sides. It’s narrow. So, you have to go from a smooth water setup at LaPorte, to a rough water set up at Bay City. We will be ready.”

To keep up with Tim and Seebold Racing, please follow them on https://www.seeboldsports.com and like them onhttps://www.facebook.com/seeboldsports?fref=nf

About Seebold Sports The Seebold/NGK Formula One Racing Team is competing throughout the USA and Canada at major races and event festivals. Team Seebold has long been one of the most dominant forces in outboard powerboat racing, winning races around the globe. Tim Seebold is a 3rd generation powerboat racer. Tim has been racing for more than 40 years. This is the 76th year his family has been in the sport. Seebold is a five-time national champion, the all-time Formula One Race Winner and already in the APBA Hall of Champions.